Policymakers need solid information for the fight against climate change.

The existential stakes are clear. That’s why on February 12, 2021, The Center for Community Energy (CCE) is holding a virtual conference: Can Electric Vehicles Power the Grid After Sundown? The conference brings together experts from the U.S. and abroad. After the conference, they will produce a consensus document to submit to the PUC and others describing the potential of electric vehicle-to-grid energy production in combating climate change.

So-called because it’s shaped like the back of a duck, this graph illustrates how a surplus of solar power during the day and a shortage of renewable power in the evening creates an energy imbalance and added energy costs.

As you can see, renewables in 2020 produce so much energy that fossil-fueled powerplants are needed less during the day. But as the sun sets and people get home from work and turn on energy consuming devices of all kinds, fossil-fueled power plants are rapidly brought online to meet a 13,000 megawatt need. 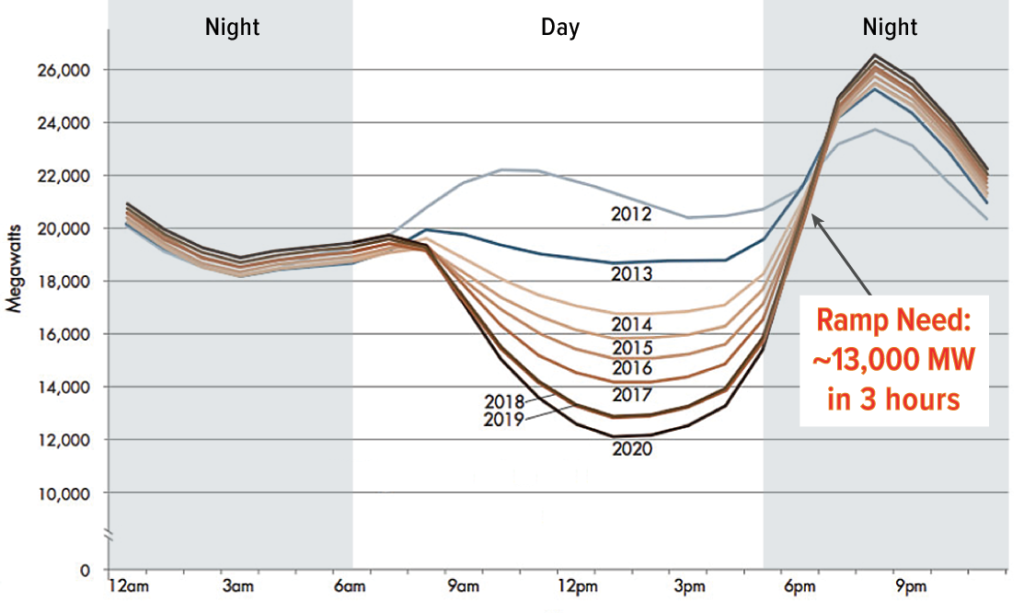 • The state of CA has a goal of 5 million electric cars by 2030
• Assume they have the battery capacity of a Tesla 3— 75kWh
• Assume they can only charge/discharge via a level 2 charger
• Their available power would be 37,000 MW

Unfortunately, the California Public Utilities Commission (CPUC) does not currently include vehicle-to-grid electrical distribution as a potential alternative to other power sources in the Integrated Resource Plan currently being considered. This will influence the future of power plants in California and the state’s global leadership for decades.

Virtual Conference Experts are Prepared to Make the Case

Our goal is to present the PUC with electric-vehicle-to-grid models for comparison to various power sources.

Avoid the cost of
supporting renewables
with peaker plants

Our conference report will be used to convince policymakers that electric vehicles can become a significant part of the solution for enabling a clean electricity grid and reducing  greenhouse gases.

Your donation will help make it possible for CCE to organize and present this important scientific conference. Your generosity will also facilitate work on the consensus document detailing the benefits of advanced vehicle-to-grid energy distribution.

Corporate contributions will not be accepted in order to present unbiased recommendations to policymakers.

BECOME A MEMBER OR DONOR